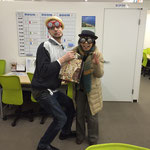 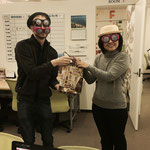 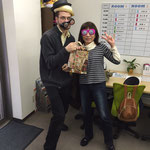 - Friday the 24th of February

- Would humans be able to survive if we entered an electronics dark age? -

What would happen.. in Kyoto?

What would happen.. in Japan?

What would happen.. in the World?

How about you personally, would you be able to cope with such a situation?

- Sunday the 26th of February

- Would Japan be able to handle a state of prohibition (alcohol) -

Japanese people are known worldwide as being good rule abiding people, quite serious, and not ones to speak out or cause outrage.

If tomorrow the Japanese government passed a law that outlawed alcohol, what do you think would happen in Japan?

Would the Japanese people change their usual quietness?

Would the Japanese people just follow the law and accept it?

Would the Japanese people start making illegal alcohol in their houses?

What do you think you would do if it happened?

Thank you for all your LOVE♥♥♥

Thank you so much for all your lovely sweets full of love for valentines day!!! We enjoyed them all!

- Friday the 17th of February

So in order to lighten up our discussion from once, let's talk about something less political.

So throughout Japan (for me only Kyoto so far) you can find mis-spelled, incorrect and just plain strange English on menus, signs, information booklets etc.

Even some companies that are very large and should have access to either enough native speakers or enough funds to hire a native speaker to check their English, have mistakes on their products or advertising.

How is it that this is still happening in Japan?

Do you think the majority of these mistakes will be fixed before the Tokyo 2020 Olympics?

Have you come across something with strange English on it in Japan, tell us about it.

- Sunday the 19th of February

With America's expensive healthcare system, and poor people being more likely to get pregnant than those who are well off, the child being born isn't an issue, but what happens after to that child can be a big issue, especially in those poor families.

But, being "pro-choice" also has it's issues, if abortion is ok, whose choice is it to want the abortion or want the child?

While it is the woman's body that contains the child, the man may not be financially able to afford a child, or perhaps the pregnancy was an accident, perhaps the birth-control failed?

If the man has these issues, yet the woman still wants to carry the baby to term, should he still be responsible for child support, if from the moment of impregnation he was against having the child?

- Friday the 10th of February

- Is trump's ban on muslim country immigrants and refugees really so bad? -

On Friday, another extremist Muslim attempted an attack in France near the Louvre Museum.

Germany, Belgium, France, and some other European countries have been attacked ever since the allowance of Muslim refugees has started. On top of terrorist attacks, there have been incidents such as the sexual assaults in Germany.

Is Trump's idea to ban Muslim refugees and immigrants from certain countries really such a bad idea?

Is it not possible that the issues hitting Europe could;d happen in America too if more people are allowed into America?

- Sunday the 12th of February

"America First!" Is what we've been hearing in the news recently.

But is it really so bad, to want to make sure there are enough jobs and products produced within your own country rather than sending it overseas for cheaper labour or materials?

Should countries really be focusing on employing global or cheap measures rather than ensuring the wellbeing of their own people, their ability to get a job(job availability), and the opportunity to buy products produced within their own country?

Or is global consumerism the way to go?

Should we be more comfortable buying cheap goods from underpaid workers in China, or should we be trying to get more jobs and products produced locally?

- Friday the 3rd of February

Copying famous brands, concepts or designs with cheaper or lower quality materials, and selling the products much cheaper than the originals seems to be possible and popular to do in countries such as China.

But does copying these products really pose an issue to anyone?

What kinds of issues could it produce?

Original brand name products are very expensive, do you think that bootlegging could be combatted by lowering prices on those original products?

- Sunday the 5th of February

According to multiple new sources, it seems war between the U.S.A. and China is becoming more and more likely. President Trump has signed an increasingly large amount of executive orders, that have caused tension all over the world.

Trump has also made some comments about Taiwan, which China still claims as part of it's territory, he also made a phonetical to the president of Taiwan.

"War with the U.S.A. under Donald Trump is "not just a slogan", and is becoming a "practical reality", a senior Chinese military official has said" - MSN News

With these kinds of issues happening, it seems war COULD break out.

What will happen in the world if it does?

What will happen in Japan?

What about in Kyoto?